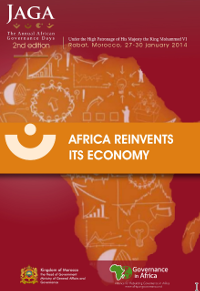 Africa is definitely the continent of paradoxes! Indeed the most endowed with natural resources on the planet, the continent hosts the poorest populations in the world. Data are stating that over a 25 years period, poverty did decelerate considerably in the world excepted in sub-Saharan Africa where the number of poor people is growing continually. It is the only region in the globe where, in terms of percentage, poverty is in a static situation1. Worst still, it is growing in absolute terms. Today, 562 millions of Africans in Sub Sahara are living with less than 2 dollars a day.

This paradox is explained basically in the continent postcolonial evolution. Since the 60s Africa is continually accumulating counter-performances in terms of development. The economic and social assessment of the first fifty years of independence is globally a disaster for most of African countries. Since 2000 however, the continent is experiencing a relatively strong growth which is still hiding dreadful social realities, basic fragilities and also obvious vulnerabilities regarding infrastructures and energy. As underlined by UNECA in the 2013 report, this growth was not translated into economic diversification, or by enormous jobs creation, much less into a wide social development. In short, this is confirming the chaotic path of African development.

At the economic level, investment ratios have been always lower that the world mean. Even worse, they have been reduced drastically in the 80s while the first two decades of independence were characterized by proactive policies with relatively huge investment efforts. Of course, the growth curve has followed the investment levels and has literally collapsed in the 80s and 90s. However, even though the 2000 era did show economic recovery, one should notice the continent lagging behind Asia regions; above all one should also deplore the economic growth social breakaway. Today with the second stronger growth mean, Africa has an income per inhabitant six times lower than the rest of world.